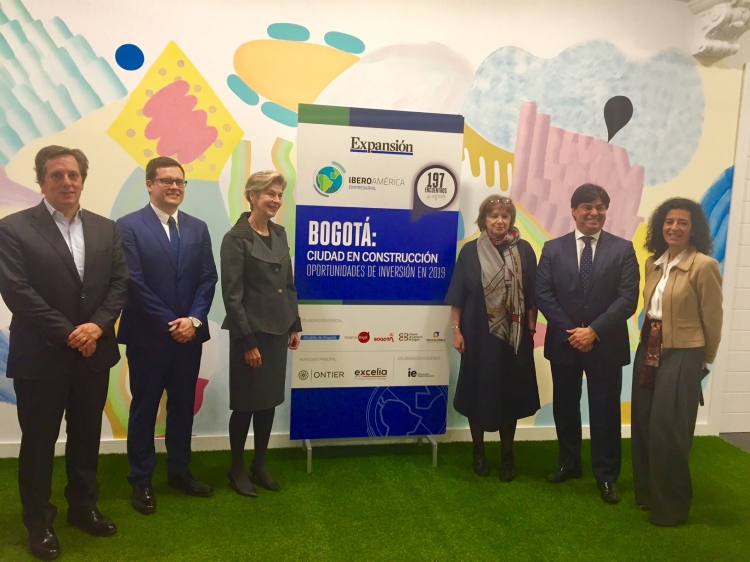 the Auditorium of ONTIER Madrid hosted a new edition of the Ibero-America in Business Forum, organised by Expansión. This time the topic addressed was 'Bogota, city under construction: investment opportunities in 2019.'

The event was chaired by María Jesús Dehesa, Partner at ONTIER. Her background as ONTIER Country Manager in Colombia allowed her to get to know the Colombian capital and the market situation. After a brief introduction, she introduced the speakers: Mónica de Greiff, President of the Bogotá Chamber of Commerce, Juan Gabriel Pérez, Executive Director of Invest in Bogotá and José Andrés Duarte, Secretary of Economic Development at the Bogotá Mayor's Office.

One of the topics highlighted throughout the event was the transformation that Bogotá has undergone in recent years, becoming one of the most important capitals in Latin America. Monica de Grieff highlighted the economic growth experienced by the city, which represents 26% of national GDP. According to the latest data from the Colombian Observatory report, Bogotá has become an innovation and technology hub in Colombia, with nearly 41% of the country's research groups located in the city. Another interesting fact: according to the World Bank, Bogotá is the city with the best business environment in Latin America.

José Andrés Duarte, Secretary of Economic Development at the Bogotá Mayor's Office, noted that this is also due to the quality of human capital, as Bogotá has the best universities in the country. The presence of the El Dorado Airport, the first in the region by volume of cargo, cannot be forgotten, as it turns the Colombian capital into a strategic destination. But as explained by José Andrés, the main aspect in Bogotá's transformation is working towards creating a different city, in which projects that seek to change the lives of its inhabitants for the better are promoted.

Some of these projects were thoroughly explained by Juan Gabriel Pérez, Executive Director of Invest in Bogotá. The projects include building Bogotá's suburban railway, the first underground line in the city, and creating a water treatment plant for the river that crosses the city. Both models reflect the development model that public institutions seek to promote in the city. After 12 years working towards investment in the city, Juan Andrés stated that Bogotá is currently a city under construction, being one of the cities in the region with the largest number of projects functioning or pending awarding. 'We have spotted more than 40 projects suitable for investment, all of them aimed at transforming the city,' he told the attendees. The presence of free trade zones in Colombia makes it attractive for foreign companies.

More than 70 professionals and company representatives attended the event, and did not hesitate to raise their doubts when the presentations ended, giving way to a more relaxed conversation between speakers and attendees.

You can read Expansion publication here.