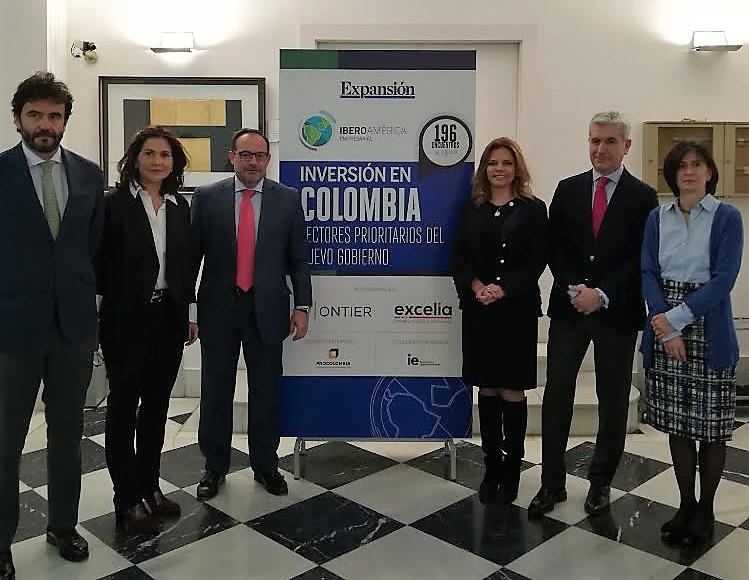 Yesterday the IE Business School hosted a new edition of the Ibero-America in Business Forum, an event sponsored by ONTIER. The topic addressed was Investment in Colombia and the sectors to which Iván Duque's new government is giving priority.

The event was chaired by Carlos Ranera, ONTIER's General Business Manager, and began with an introduction to the attendees of the current situation of Colombia’s economy. Juan Carlos Martínez Lázaro, Professor at the IE Business School, talked about the recovery of the country's economy, which is expected to reach growth levels close to 3% this year. The solid commercial relationship between Spain and Colombia was also highlighted, noting that the country is one of the preferred destinations for Spanish SMEs when starting their international journey.

According to Flavia Santoro, President at ProColombia, the stability of the economy, the promising opportunities and the presence of a government that is 'business-friendly' are the main factors that make Colombia a perfect country to invest in. Flavia highlighted that Colombia is the third country with the best business climate in the region. Agroindustry, renewable energies, infrastructure, orange economy and tourism are the sectors with more opportunities, described by the President of ProColombia as the priority sectors of the new government. When asked about the essentials to guarantee the success of the transformation of Colombia’s economy, Flavia noted that 'removing corruption from the picture, achieving equity for all businesspeople and investors who operate in Colombia or plan on doing so. That's going to be the greatest legacy of the government'.

The creativity and entrepreneurial attitude of Colombians were also mentioned throughout the event. Both of them aspects that are part of the campaign 'Colombia feels the Rhythm' presented at the FITUR tourism fair taking place in Madrid last week. The aim of the campaign is to highlight the country&#39;s musical character while singing to the world why Colombia is an attractive destination for investors and tourists.

Excelia, a Consulting, Technology and Professional Services firm, discovered Colombia's business possibilities seven years ago. Javier Alberola, international director of Excelia, was the last speaker of the morning session and explained to the attendees the successful implementation of the firm in the country. For Javier, the key to success lies in the incorporation of a local person who knows the cultural aspects, the markets, the potential clients, etc. Currently, Excelia'ss presence in Colombia serves as a hub for the rest of Latin America.